King Edward VI offers every child the opportunity to fulfil their academic, creative and sporting potential to ensure each and every child achieves academic success.

At King Edward VI Academy we enforce our uniform policy. 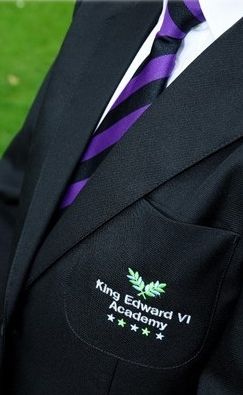 We believe that wearing uniform gives our students a sense of belonging and identity and helps create pride in the Academy, and a sense of community.

Our students are our ambassadors in the community, therefore, we expect students to wear full uniform, with ties on and with shirts tucked in, when travelling to and from the Academy. All Academy functions require full uniform to be worn.

All students are expected to wear the designated King Edward VI academy uniform and we expect our students to be neat, clean and smartly dressed.

Our students wear their uniform proudly, with shirts tucked in and looking smart.  We work hard to eradicate fashionable uniform trends, such as having large gaps between trousers and short trainer socks, short skirts, dyed hair, piercings.  These, we realise, seem minor to many, but it is worth reminding ourselves that the purpose of uniform is to remove hierarchy, difference and status as much as we can for our students.  Whilst ever students can raise their status over others with minor amendments to uniform (blazer sleeves rolled up, skirt shorter than allowed, several piercings) then we allow a culture to develop where appearance is an important part of who students are.  The entire reason for having a uniform in a school is to remove that culture.  In a great school, students do not focus on what another person looks like, they are much more focused on their personality and character.  This is especially important in the world we currently live in where social media constantly reinforces messages to children that their status is heavily tied up in how they look.

We believe that tackling this culture in school will support pupils with their mental health, and this is why such minor infringements of rules are so important to us – it isn’t because we think that having a short skirt, or brightly coloured hair, or several piercings affects the way a student learns, but it is because we understand that it is an attempt to be different, to raise themselves in status (often with unintended consequences) and reinforces a culture where students feel that they have to look a certain way.

With this in mind, we would like to request that parents support us in reinforcing the rule that trousers should meet Shoes, and the socks should be black ankle socks, not shorter trainer socks please.  It is fashionable to have short trousers and a big gap between trouser and sock, and the bigger the gap, the more the student is attempting to establish themselves as different to others.  The uniformity of uniform is very important, as it levels the playing field for everyone.  No-one looks cooler, richer, trendier or more rebellious than anyone else, then the attention can be focused on what lovely people we are.

Electrical items, such as mobile phones, speakers and ipads should not be used on the Academy site. If seen or heard, these will be confiscated by staff and parents may be asked to collect them.

Hair should be a suitable, neat style. They should not be excessive and should have a natural colour/tone. Extremes of hairstyles or hair colour, as decided by the academy, are not acceptable in any circumstance. Any hair that is shoulder length must be tied up. Hair that is shaved MUST be blended into the rest of the hair and not deemed as extreme. Hair that looks shorter than a “number 2” cut will be considered extreme.  The principal’s decision will be final.

A warm suitable coat can be worn for the journey to and from the Academy. Hoodies (with or without a zip), tracksuit tops, cardigans and caps are not allowed inside the Academy. When inside the academy buildings coats must be removed.

All clothing should be CLEARLY MARKED with the owner’s name

Students that come into the Academy not wearing the correct uniform will be isolated until it can be corrected. Parents will be contacted.  Thereafter, students may be sent home to correct the uniform and return to the Academy with it corrected. Only medical notes will be accepted for agreed exceptions to our uniform expectations.

The Principal's decision regarding all uniform and presentation issues is binding and final.

The Academy makes every effort to safeguard the possessions of students on site.  However, students and parents should be aware that personal items are brought into the Academy at the owner’s risk and that the Academy accepts no responsibility or liability for any loss.  This includes, but is not restricted to, jewellery, mobiles phones, electronic equipment and bicycles.